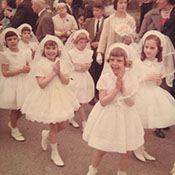 If A Confession Falls And No One Is Around To Hear It, Does It Still Make A Sin?

The drills happened every Wednesday night -- up at St. Francis de Chantal. The earthly saints, bound in black and white, snapped the whip as we recited our catechism lessons, instructions and protocol —beating and berating us with the seriousness of it all. Our First Holy Communion.

As part of this religious rite of passage, we had to prepare for the Sacrament of Reconciliation (as they call it now). Back we just called it, “going to confession”. And it was up to me to come up with mine. I worked on it for months.

The saints never told us how long a confession should be.

I panicked, realizing I didn’t know what the hell I was doing. I only knew I was eight years old and had my whole confessional life ahead me, as long as I got this first one right.

I ran through the Ten Holy Commandments, looking for ways I could have screwed up:

Unlike my two oldest sisters, I escaped going to Catholic School. My dad eventually took them out claiming the nuns were, “No better than the damn Nazis”, when my oldest sister told him that after some minor transgression, she had to keep her arms up in the air as punishment.

Mom converted or as she liked to say, was “tricked,” into becoming a Catholic, fully surrendering her Baptist religion. She heard them say she HAD to become Catholic in order to have her children baptized in the Catholic Church, but later was told it was an OPTION, really. This irked her, but I think she was happy to ditch the dour Baptists and their rules…no dating, no dancing, no drinking. She quickly embraced Catholicism; eventually surpassing my father’s altar boy dedication to the religion.

Compared to the Texas Southern Baptists on my mother’s side, the New York Catholics on my father’s side must have looked positively medieval – what with all that kneeling, sitting, standing, signing of the cross, priests blessing the entire room with holy water, incense burning, consuming Jesus’ blood and body and all those damn blessed sacraments. But at the end of the week after church was over, at least the Catholic contingency could wash away whatever sins Jesus couldn’t, with a big pitcher of whiskey sours, while dancing to Al Hibbler belting out, “When the Lights Go Down Low.”

Every Sunday morning, the whole “fam damnly” as my dad liked to put it, piled into our no seat belts, no air conditioning red station wagon and headed over to St. Francis de Chantal, where the seven of us took over an entire pew. For an hour we listened to prayers, letters and sermons, mostly delivered in Latin which none of us understood.

It’s the Catholic version of the old Jewish joke: “The Rabbi told me the meaning of life, unfortunately, I don’t understand Yiddish.”

We’d arrive in our finest outfits - hats, gloves, dresses, coats, small purses with our embroidered “Sunday” handkerchief inside (yours truly also wearing her embroidered “Sunday” underwear) and black or white, depending on the season, patent leather shoes. On the occasion that daddy would go unshaven in his grungy “weekend work” clothes, mommy would sit as far away from him as possible, lest people think they were together. She was a live bookend to her five daughters in between them. When the money plate was passed around, sometimes daddy would drop in a twenty and then take back some change. This really drove mom nuts and they’d have a big fight on the way home.

Fasting for hours before mass meant that instead of praying to Jesus up on the cross, counting on him to make me a better person, I was really praying for mass to end, so I could get home to daddy’s Sunday breakfast of bacon, fried eggs and rye toast with butter.

I was hungry, sure, but less in my soul than any Catholic had a right to be.

All this work, sacrificing and practice finally led up to the eve of my First Holy Communion where I’d have to make my first confession. I entered the dark, quiet church. There a little early, I knelt at the candle-glowing altar, pulled a wood stick from the sand and lit my own candle and prayed. I practiced the confession in my head, asking God not to let me down. Then took my place, with the rest of the kids all lined up on either side of the confessional box (where the priest lay in wait) for my turn.

I kept my eyes on the deeply hued purple curtains on either side of this box, watching one kid exit and the next one enter. And like a lamb to the slaughter, I moved from number fifteen to ten to five to two to one.

I pushed aside the heavy curtain and stepped into the center of a small box. It was dark inside and I heard someone murmuring. The room was so small, that I was able to feel all three walls and the curtain while turning around in a circle. I made my way to the back and knelt on the cold stone floor, my nose barely touching the wall. I nervously began:

“Bless me father for I have sinned. This is my first confession…”

Somehow I managed to get through the whole thing…mother, father, sisters, teachers, friends, strangers. All the indiscretions I’d made. The times I talked back. An unkind word I said. A chore I left undone. A thought I had.

I finished and waited. My knees hurt on the hard floor and I could feel my hot breath bouncing off the wall. Nothing happened. Is anyone there? Where is my absolution? When do I recite the Act of Contrition? Is he going to give me a couple of Hail Mary’s for my penance and throw in some Our Fathers for good measure? Oh Jesus, are the sins I confessed to so awful that the priest won’t even talk to me?

I heard the slide of a small window opening up and looked over my right shoulder. A sliver of light shined on the stone floor and there, finally able to see, I noticed the cushioned kneeler underneath. Above it, a rail with room enough for elbows to sit upon, hands clasped in prayer. In shadowy profile behind the small screen, the priest began with the sign of the cross and whispered:

“Bless you child. How long has it been since your last confession?”

Mortified at having confessed to a wall, I made a break through the velvet curtain and lost myself in the deadly, darkly silent, stained glass church.