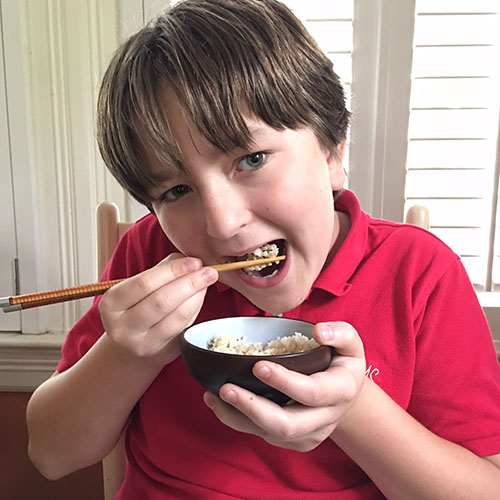 ZEN & THE ART OF COOKING

There is a certain Zen to making a tasty, satisfying meal with few ingredients. I like to challenge myself to five. This comes from my tendency to be intimidated by complicated recipes, the limitations of what’s in my kitchen, the time I have and budgetary constraints. I’m not a purist, so salt & pepper don’t count.

In 5th grade I gave Peggy, a friend of my older sister’s, “my” recipe for Banana Nut Bread (which I probably got off the back of a Betty Crocker box). When she saw my detailed measurements (“1/8 tsp. cinnamon”), she let out a laugh while rolling her eyes. I wouldn’t understand why for many more years - that cooking is more a “feeling” than an absolute (especially a 1/8 tsp. absolute).

Cooking is like life – you have to be ready to react to and rise gracefully above unexpected challenges. YOU CAN’T LET THE PASTA BEAT YOU!

It wasn’t until I cooked along side my mother-in-law that I understood touch, taste, smell and intuition were just as important as exact measurements provided in a recipe. Quite frankly, I enjoyed her Pollo con Arroz, Pico de Gallo, Carne Asado, Tripe, Red Chili Enchiladas, Albondigas, Carnitas, Carne Guisada and Chili Rellenos much more than I ever enjoyed being married to her youngest child (ex-husband #1).

The one positive thing I took away from that disastrous marriage was the understanding of intuitive cooking. And that parting gift set me on a happier course in life. YOU CAN’T LET THE BAD MARRIAGE BEAT YOU!

But, as any great creation demands, the need for a good foundation is imperative. The basics of cooking (using those 1/8 tsp. of cinnamon) must be learned from the ground up. And when you’ve got a few of those under your apron -- let the culinary games begin!